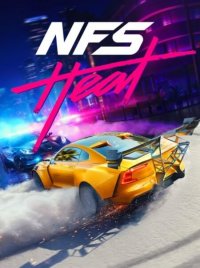 Need for Speed Heat is an open world racing car simulator from Ghost Games, published by Electronic Arts on August 14, 2019. The plot takes the player to sunny Palm City.

The hero comes to a new city to get money, fame and adrenaline. To get all this, he will have to get into the league and defeat the current champions. Also, local authorities decided to take street racers seriously and created a special unit.

The developer took the legendary Underground 2 as a reference, and tried to recreate the very atmosphere of illegal races around the city at night. At the same time, they did not forget to bring variety to the process, namely division by time of day. You can switch between day and night at any time. This is required to progress through the story.

Under the starry sky, drivers compete not for money, but for respect and recognition. It is necessary to achieve a new level that opens access to more powerful machines and improvements. But you need finances to buy them, you can earn money by participating in the official tournament, which is just taking place in the center of the metropolis. During such races, the policemen do not interfere with the athletes, and the city traffic cannot be encountered on the highway.

The appearance of your avatar is highly customizable and he or she will participate in all cutscenes. Tunig, as always, is varied and allows you to customize the appearance of your steel friend. Also, the car is configured for different purposes: driving on the track or off-road and grip or drift.

Between competitions, Need for Speed Heat lets you ride around the entire map without limits, collecting collectibles and simply taking in the views. There are also mini-tasks scattered around the streets, such as gaining maximum speed at certain sections and long jumps. Numerous graffiti are depicted on the walls, upon finding which, a sticker on the body becomes available. Screenshots System Requirements Features RePack How to install Need for Speed Heat game