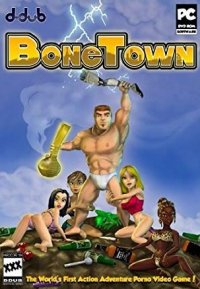 At the beginning of the passage, the main character has very small testicles, so only fallen women are available to him, who do not always satisfy. The further the protagonist moves, the larger his testes become, which means that more slender, beautiful, well-groomed and wealthy women begin to pay attention to him.

The game begins with the awakening of the character, who gets urinated on his face. Players are encouraged to undergo training in beating a brother. At the same time, the blonde who is nearby talks about the goals of the game and provides him with intimate services. The hero must seduce girls and have sex with them, the more he is fascinated by him, the closer he will be to success.

After a dizzying start, the player is approached by a man dressed in a suit. He talks about the laws of the game world, according to which it is forbidden to commit lecherous actions in public places, otherwise the hero faces arrest and censure.

The game world is fully explorable. The player can postpone the mission and go for a walk through the city streets, finding secret places. Wherever the hero goes, crowds of girls with whom he can have sex are waiting for him. Sex in the game is present not only to bring pleasure to the protagonist, but also, for example, to restore the health scale. Screenshots System Requirements Features RePack How to install BoneTown game