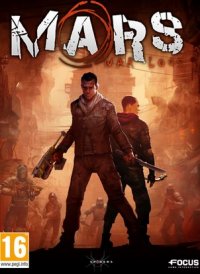 A computer video game Mars: War Logs was released in April 2013; it was developed by the Spiders studio and published by Focus Home Interactive in the genre of a partial RPG mixed with cyberpunk.

People were forced to start exploring Mars. More than two hundred years ago there were colonies; new inhabitants of the planet had to survive, occupying the most suitable for life areas: to grow vegetables that could grow on harsh soil, to breed cattle. Mars War Logs Free Download.
Approximately seventy years, during the arrival of the new colonists, a cosmic catastrophe occurs, as a result of which the axis of the planet has shifted and most of the constructed structures were collapsed. People have lost touch with the Earth. The survivors had to leave the destroyed areas, and those who fell under the radiation of sunlight, became mutants.
Now, when the food stocks were limited, the war for water began. The largest water companies now have turned into states and they are engaged in an ongoing battle between themselves.
The game process is conducted on behalf of a military refugee, who is in the position of relations between two major factions.
Pump up your combat skills, weapons, fight with mutated monsters, find allies and fight for resources. The fate of Mars is in your hands now. Screenshots System Requirements Features RePack How to install Mars: War Logs game

Date TorrentDownloadSize
5 May 2017
Hey Everyone!