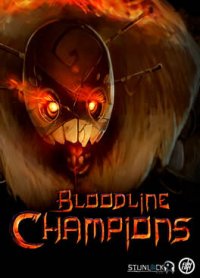 The success of Dota 2 and League of legends has generated a lot of people who want to take part in copying the classic MOBA projects. And not only on the PC, but also on the console and mobile platforms. Bloodline Champions - an attempt to surprise fans of the MOBA genre.

When you first get acquainted with the game, it seems that gamers will not see anything new. The game’s mechanics are traditional, where the following elements are present: two teams of five heroes each, a wide pool of heroes and combinations, specialization of heroes on the battlefield, the goal of destroying the enemy’s structure, improvement as they farm, a symmetric map, three lines of bot, top, mid.
However, upon further acquaintance with the game, you may notice that despite the genre similarity in Bloodline Champions, there are their own rules: the absence of the usual creeps, farm; the dominance of Non-target systems, where you have to aim even with a “heal”; short game sessions of 10-15 minutes; six skills to learn from heroes; spectacular animation of skills; dynamic gameplay.
The developers managed to surprise the lovers of battle arenas. There is action, as in shooters, teamwork, as in MOBA, a wide arsenal of spells, as in MMORPG. The presented video game is worthy of attention for high-quality graphics and bold experiments. Screenshots System Requirements Features RePack