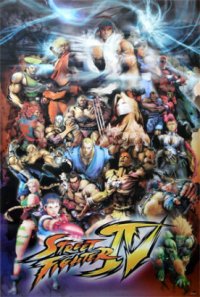 Street Fighter IV is a fighting game released by Capcom in 2009. Over the years, the gaming industry has not seen a sequel that dynamically and aesthetically opposed the previous iteration of the franchise. If the third part could be easily completed, then Street Fighter IV will make players tense. The plot is narrated in short Japanese animated videos, as expected.

After watching the prologue for your character, you fight in a handful of matches before meeting with your opponent, then you have to meet Seth in his laboratory and finally watch the final.

With a sequential passage through each character, you unlock the entire list. The endings, however, usually do not solve anything, leaving you unanswered, and forcing you to continue fighting to view the stories of all the characters.

In the fourth part, the developers added focus attacks, which became the basis of the combat system. The action of the focus attack is to absorb the damage done to the character, and reflect it in the form of a counterattack. The long-forgotten super combos that every character possesses have also returned. Each hero has at least one unique trick. Screenshots System Requirements Features RePack How to install Street Fighter IV game