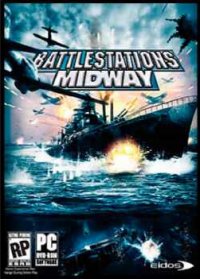 Battlestations: Midway is an arcade strategy game from Eidos Studois Hungary, released January 30, 2007. Feel like the commander in chief of a huge navy. Players can choose between 2 modes. Give orders to troops in tactical map mode or choose between a ship and an airplane and in an arcade simulator mode and enjoy spectacular battles.

The player will not have to stay in tactical map mode for a long time, however ignoring him at all is the same as waging battles blindly. The map has 3 zoom levels: we see all military operations, and troops are displayed at the unit level; ships in squadrons are visible; you can consider separately all combat units and coastal fortifications.
The strategy is to ensure that the player, having studied in detail all the capabilities of the combat units under his command, correctly composes them into groups. Reasonable construction is one of the secrets of victory in battle.
The gameplay is also diverse in its problems. During the battle, you can not notice the enemy torpedoes, and the original tasks will be added to extinguish the fire, repair the ship or even the descent to lifeboats. But under the command may be not only ships and aircraft. For merits in battle, submarines become available to players. Screenshots System Requirements Features RePack How to install Battlestations: Midway game