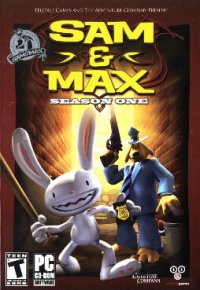 Sam & Max Season One is a computer quest from Telltale Games, released in 2007. The game consists of 6 episodes, each of which has its own plot, but all the series are tightly connected. The central characters of the toy are a humanoid dog named Sam and the huge hare Max - both creatures were created by Steve Presell in comics.

A brave couple are real experts in the field of hypnosis, but they do not own this skill, but destroy its influence. In all episodes, their affairs are connected with hypnotists. Friends themselves call themselves freelance police officers, ready at any time to come to the rescue.
To successfully complete the mission, you need, as in any quest, carefully inspect the surroundings, paying attention to the smallest details. Each item, if possible, must be taken and added to the collection. Sooner or later, the find will come in handy.
Part of the time you need to spend talking with non-player characters, because in a conversation they can tell a lot of useful things. Often, getting the subject depends on the correct conversation. This game can be played in one breath while laughing at the jokes that the authors skillfully put into the script. Screenshots System Requirements Features RePack