Thrillville: Off The Rails 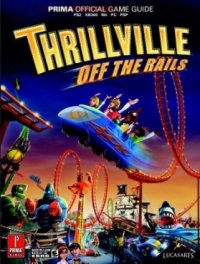 Thrillville: Off The Rails is a strategy for amusement park lovers from Lucas Arts. It was announced on October 9, 2007. You are Mortimer’s last hope, obsessed with the idea of ​​creating the perfect entertainment complex. However, not all so simple. Harrison Park is a competitor and its owner will not allow to undermine its popularity.

Thrillville: Off The Rails review

First, it is proposed to create your character. The game does not involve hovering over your own creation. You will have to move around the park from a third person. The mechanics of the game are simple: create the perfect complex and complete mini-games. All entertainment buildings are being erected in specially designated places, which in turn are sorted by mini-towns with their own theme.
You also have to design your own roller coaster. The budget is limited, but as soon as the beginning of the park is laid, it will begin to generate income. Money can be found just by walking through the streets.
The storyline is also present. To advance, the player must carry out various orders scattered throughout the territory of possessions. Points are awarded for the performance, providing access to new attractions and buildings.
Stunning design, custom control, the ability to create attractions with your own efforts will drag you into the game of strategy lovers. Screenshots System Requirements Features RePack