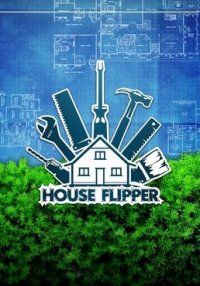 House Flipper will be an interesting game for those who like to streamline and correct flaws. The user will feel the role of the entire repair team and will be able to perform various household chores.

The player finds himself in an old house with already broken dilapidated furniture. The plumbing is out of order a long time ago, and the electrical wiring is in a very poor condition. Using the basic tools, the player must get rid of visible and invisible damage and defects in the house as much as possible.

The user has more than a hundred different interior items at his disposal, thanks to which he can create the most comfortable corner of this planet.

You can not only rearrange objects, add new ones, remove old ones, now you can even remove walls. If you don't like a wall, an old wardrobe, a curbstone, which has been hit more than once, you can relieve stress and destroy them, watching how the developers tried to convey the physics of destruction. You need to free up space of trash in order to put something beautiful in its place.

You can try, put your heart and soul into the project and leave the newly made house for yourself. Every person dreams of creating a cozy place with his own hands. Or you can become a real estate agent and sell your creations to other people. By repairing and selling renovated houses and increasing their capital, the player opens up access to more serious investments.

Realistic breakdowns, the ability to feel like not only an electrician, but also an interior designer, and much more - everything is available at House Flipper.

Nice picture, smooth movement and variety of game functions distinguish House Flipper from similar simulators. The developers at Empyrean have tried to make their product the best in the genre. House Flipper is an exceptional opportunity to become a real renovator and create masterpieces by furnishing your homes. Screenshots System Requirements DLC's Features RePack How to install House Flipper game