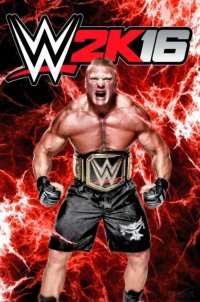 WWE 2K16 is an action and fighting game where players take on the role of one of the many WWE fighters, sparring with other contenders for the champion seat. Developed by Yuke's studio, and published by one of the most famous divisions of 2K - 2K Sports. The release took place in 2015.

Compared to the previous game in the series, 2K has made a lot more innovations. Now users have access to almost 2 times more characters than WWE 2K15. Previously, there were only 67 of them, but now their number has increased to 120 unique characters. Moreover, this composition is included exclusively in the game itself, and is not expanded with the help of add-ons.

Much in WWE 2K16 has undergone some changes that have affected the visual aspects of the game: the physics of the models has been improved, the quality of the crowd has been improved, and so on, which visually strongly distinguishes the game from its predecessor. Also, a licensed soundtrack was written and a career mode was finalized, which was significantly expanded, and players can now comfortably spend a lot of time in it, participating in sparring of various characters.

According to the WWE universe, the player can create their own shows and earn from them, setting a certain fee per view. This makes the game in some sense a business simulator that allows you to conduct your own shows with commentators and world-famous professional WWE participants.

An online mode is also available, where you can test your strength, fighting with other users, showing your skill in fighting with different opponents. WWE 2K16 will appeal to everyone who is a fan of sports computer games with a huge selection of characters and a huge number of opportunities, both in terms of organizing shows and developing a single-player career. Screenshots System Requirements DLC's Features RePack How to install WWE 2K16 game