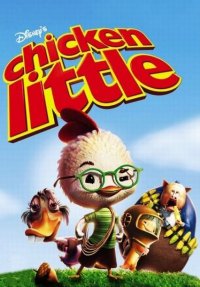 Disney's Chicken Little is an adventure game. Developed by Avalanche Software and released in 2005. The game is based on the cartoon about a little chicken.

The gameplay consists of a journey through the game world, where the hero must collect acorns, as well as baseball cards, which allow opening bonus mini-games in multiplayer mode. The main passage is conducted by Chicken, but at some points the player can switch to Fish, Run, Abby or Lurki, the mayor of Turkey.

The plot tells about Tsyp, who at one moment noticed that the sky fell on his head. No one in the city believed him, including his family and friends. After winning a basketball game, Chicken found that a piece of heaven was back. As it turned out, the "fallen sky" is the cover of the spacecraft, which changes color like a chameleon.

Fish accidentally gets on the ship and Chip and his friends had to rescue him, fleeing from evil aliens, similar to octopuses. Together with the characters, an orange fluffy creature escapes from the ship, which no one notices. Fuzzy turned out to be the son of aliens, so they deploy an operation to return him to the ship.

The locals and the protagonist's father finally believe him when houses and other buildings start to disappear throughout the city. Tsypa, along with his father and friends, understand what the matter is, are looking for a fluffy alien, and climb the highest spire to be noticed.

Grateful newcomers return all the destroyed buildings and residents of the city. It turned out that they flew every year to collect acorns, and not to capture and enslave the population. After the happy ending, everyone goes to the cinema to watch a movie based on Tsypa's adventures. Screenshots System Requirements Features RePack How to install Disney's Chicken Little game