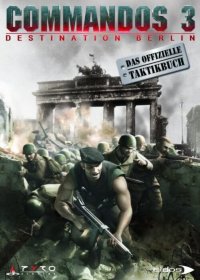 Commandos 3: Destination Berlin is a tactical strategy game from Pyro Studios, published by Eidos Interactive on October 16, 2003. The action takes place during the Second World War. The player acts as the commander of an elite unit operating both on the front lines and behind enemy lines. There are three global campaigns to choose from, each of which has its own place of action and storyline.

The characters remained unchanged from the second part: Green Beret, Marine, Spy, Thief, Minesweeper and Sniper. At some levels, a whole squad of allied soldiers is given command.

The mechanics of the game as a whole have not changed and will be well known to all fans of the series. The dynamics have increased, now thoughtful and unhurried missions alternate with fierce battles on the front line. We diversified the arsenal, adding machine guns, mortars, machine guns and artillery to the models already familiar to players. Transport was also introduced, now motorcycles, jeeps, trucks and even tanks are available at the location.

Ai has changed for the better, the sentries react vividly to suspicious noise and movement. The body left in plain sight will certainly attract attention, after which the search for the saboteur will begin. All this, undoubtedly, complicated the passage and required to look for new solutions.

Each squad member in Commandos 3: Destination Berlin has their own strengths. For example, only an explosives specialist can plant explosives, throw gas grenades and defuse mines. The sniper fires a rifle at the sentries. Only a Marine can use scuba gear and stay under water as long as he wants. And the Spy is trained in all the skills of disguise, which allows him to pretend to be "his own" as much as he pleases, dressing up in a fascist uniform. Everyone learned to throw grenades and tie stunned people and carry them, which was not the case in the previous parts. Screenshots System Requirements Features RePack How to install Commandos 3: Destination Berlin game