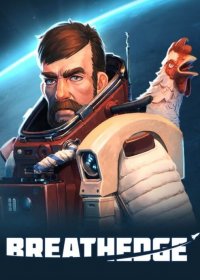 Breathedge is an open space survival game from indie studio RedRuins Softworks, published on February 15, 2021. The story tells about the adventures of a hero named Man, who is taking the body of his grandfather to a space funeral.

Suddenly, the ship is destroyed by radical eco-activists, and the main character is captured by two robotic coffins. The hero's task is to figure out what is happening and survive in open space among the wreckage.

The mechanics are based on the standard principles of the survival genre: in addition to the health bar, the character needs food, water and air. Most of the time the player spends in the study of the surrounding space, in search of materials and points of interest.

Among the wreckage, there are few safe places where you can replenish the supply of oxygen, create the necessary tools. For more efficient travel, you need to constantly improve your spacesuit, increasing the strength and size of the cylinders. Unlike similar projects, the tools here have a margin of safety and break down rather quickly, which makes it necessary to collect a stock.

The plot is divided into chapters, each of which takes place in new locations. The main distinguishing feature of Breathedge is the story and its presentation. The environment is full of all kinds of references, humor and irony. Each scene, dialogue or decoration ridicules one or another stamp, the player, refers to other franchises and real events.

The constant companion of the protagonist is artificial intelligence, built into the suit and constantly, in a caustic manner, commenting on what is happening. The developers don't even hesitate to laugh at themselves and their own decisions.

The atmosphere also deserves attention. The authors managed to convey the entire depth and coldness of outer space, as well as the feeling of hopelessness and imminent death. Screenshots System Requirements Features RePack How to install Breathedge game