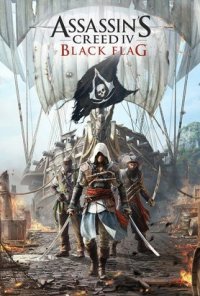 Adventurer Assassin’s Creed 4: Black Flag, released in 2013 under the leadership of Ubisoft Montreal, was the sixth game in the series. This time, the developers moved even further away from the standard story of a noble killer, transferring the action of the plot to the Golden Age of Piracy - the eighteenth century.

The motivation of the protagonist has also changed. Now, instead of holy vengeance or religious struggle - a thirst for money and adventure, however, in the name of love. After the failure of Assassin’s Creed III, where the conflict was built around the US Civil War, and the hero was a virtually nameless Indian, the audience accepted the changes much warmer.
The combat system has not changed much. Everything is also convenient and practical. Having drawn conclusions, the authors worked on naval battles, which turned out to be beautiful and dynamic. The standard “towers” ​​for the series have been changed, which were almost useless in all games of the series and became points of rapid movement.
The system of additional tasks has been redesigned, now they can be typed and performed when convenient. The game world at Ubisoft turned out to be magnificent: high-quality drawing, a bunch of tasks scattered everywhere, living inhabitants. Multiplayer is represented by six modes on twelve maps: from the usual "all against all" to team confrontation and capture points. It is worth noting that network variation is not very popular and there are few players on the servers. Screenshots System Requirements DLC's Features RePack