Magicka 2 was released in 2015 by Paradox Interactive. The player controls a wizard who owns various spells and can control elements. According to the plot, evil magicians captured the city of Midgard. Evil spreads farther and farther. The player has the opportunity to take three friends to the game who help him to fight evil. The player needs to find a sorcerer who, according to the prediction, should unite all kind wizards.

Players need to learn spells and apply them against evil. The hero has a magic staff and a robe. The player finds various artifacts during the game Magicka 2 Free Download. The most important task of the player is to study the spells thoroughly. It is very important to be able to mix components correctly. Fire and water give steam, and a stone melted by fire forms lava. If you combine water and frost, the player will receive a piece of ice and can throw them into the opponent.
A player can mix at least five elements. It is not difficult to remember combinations. As the game progresses, the hero gets new components and combinations. For example, combining the rays of life and death, the hero receives a powerful explosion. The game has a huge number of special effects, which makes it interesting and fun. Screenshots System Requirements DLC's Features RePack How to install Magicka 2 game 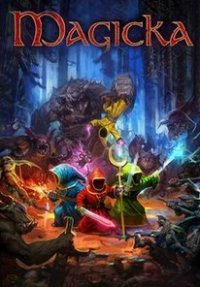