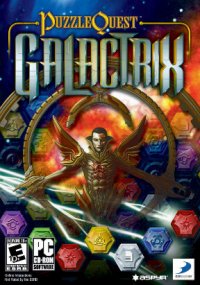 Puzzle Quest: Galactrix is ​​a puzzle with role-playing elements from Infinite Interactive, published by D3 Publisher on February 24, 2009. The plot of the game is not very original. The player acts as a graduate of the galactic academy. Getting into outer space and completing story missions, the protagonist learns about some universal evil that only he can stop.

Gameplay Puzzle Quest is divided into two parts. The RPG component is well developed. Both plot and side missions are presented. The dialogue system and the ability to recruit teammates along the way contribute to the process of studying locations. There are different factions with which you can cooperate or quarrel. Trading resources on different planets brings money that can be spent on the purchase of new parts of the ship and on the upgrade. The hero receives levels during the game and improves their characteristics with them.
The second part is puzzles. They are made according to the scheme three in a row, but with their own changes. The stones on the playing field are not quadrangular, but made in the form of hexagons. This allows you to shift chips in six directions, which opens up more opportunities for thinking through the strategy of the party. Battles take place on the same field. Opponents take turns to make moves, and apply bonuses and skills. Each color of the drawn line corresponds to the skill of the heroes. Screenshots System Requirements Features RePack

Date TorrentDownloadSize
28 May 2019
Hey Everyone!