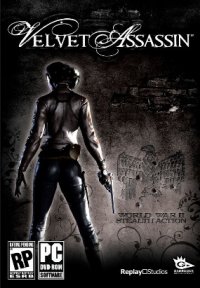 Velvet Assassin is a third-person stealth action game from the German company Replay Studios, released in 2009. The game takes place during the Second World War, where the player will play the role of the English spy Violetta Summer and take part in a variety of secret missions to eliminate important military goals built on the heroine’s personal memories.

The developers decided to bring to the plot the motives of the real story of the English agent Violetta Chabot, who was captured by the Nazis in occupied France and deported to the Ravensbrück concentration camp, where she was expected to be interrogated, tortured and killed. Playing on behalf of the character, the player introduces himself into important military installations on European territory, where he performs operations to eliminate certain leaders, saves other agents, and destroys secret targets.
The game process forces you to rely more on silent killings when firearms are used only in extreme cases or in a difficult situation, because the agent’s main goal is not to give himself away. To do this, the game has the ability to constantly change shape, look for workarounds and often attack from the back - the success of the mission depends on the speed of your actions. In your arsenal there are several melee techniques, as well as additional funds in the form of electrical panels or puddles of spilled gasoline. Screenshots System Requirements Features RePack How to install Velvet Assassin game

Date TorrentDownloadSize
20 May 2019
Hey Everyone!