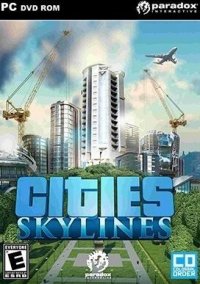 Cities: Skylines is a city-building simulator developed by the Finnish company Colossal Order. It was published by Paradox Interactive. The release took place in March 2015.

As it should be according to the canons of city-planning simulators, the main goal in the game is to build your own autonomous city. Users in Cities: Skylines will have to: divide the game space into development zones, place roads, collect taxes from city residents, organize the movement of city transport and the work of municipal services, and much more.

You always need to remember about maintaining the state of the settlement budget, the number of population, monitoring the environmental situation (clean air, water and soil), traffic and road junctions, and so on. Residents should always have health and satisfaction scores completed.

At the beginning of Cities: Skylines 2015, players are provided with 4 km², some money and a set of tools needed for the first couple. There is land on the map, in some places there is access to the ocean or other bodies of water. Highways and a railway have already been laid, and new people will come to the city along them.

The city must be divided into districts: residential, industrial, commercial and office. All areas must be connected by roads and provided with public transport. Each district should have buildings for the convenience of residents: hospitals, schools, shops, fire stations and police stations.

Having established a harmonious life in his town, the player can acquire adjoining plots of land and expand the territory, creating new districts. You also need to take care of foreign policy, and establish cooperation with other cities: have trade relations and receive tourists.
Screenshots System Requirements DLC's Features RePack How to install Cities: Skylines game