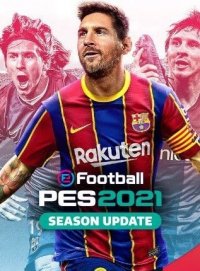 eFootball PES 2021 is not a new game from Konami, but an updated version of PES 2020. It contains the latest information on club squads and players.

The game is not very different from the previous one, but some changes were made to it: they added a lot of animations, made it easier to pass the ball and its roll became smoother. The physics has also improved significantly, the ball bounces off the crossbar more realistically. The dynamics have increased, but players can still set the speed they are comfortable with. The game in defense has changed noticeably, the characters have become more agile, perform balanced actions and play with the body.

The graphics have improved significantly, new faces have appeared, and the existing ones have been redrawn. The players are now pleasant to look at, and their uniforms have also undergone changes. The creators also worked on the fall of shadows and light, which the players complained about in previous parts. It has become much easier to play matches during the daytime.

The modes in eFootball PES 2021 all remained in place, no new ones were added. The player can choose Master League, Become a Legend or Euro 2020. To feel like a manager and owner of a football club, it is recommended to choose the Master League mode. Here, the player is required to monitor the development of the team, participate in training, developing a plan so that they are effective. You also need to manage your finances wisely, decide who to raise salaries or buy new players. Each footballer is a personality with his own characteristics and characteristics, so the team leader must determine their role in the match, based on this data.

In the Become a Legend mode, it is proposed to live the life of a football player, starting from the lowest level, reaching the top in a football career.
In Euro 2020, players will have official tournaments with the teams that participated in the championship. Screenshots System Requirements Features RePack How to install eFootball PES 2021 game